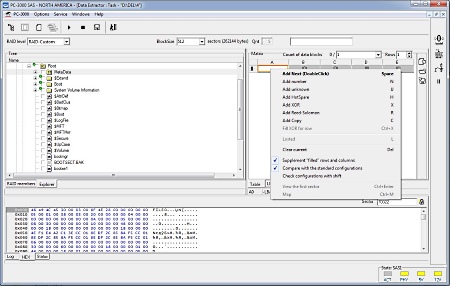 The main problems with RAID recovery

Today, RAID arrays have a large number of drives and have complicated structures (combined and proprietary levels) while several members of a RAID can have serious physical damage (damaged surfaces, HSA, servo-information, etc.). The file system metadata of the RAID can be also damaged.

Thus, there are several problems with RAID data recovery:

How to work with damaged HDDs in a RAID

The Data Extractor SAS RAID Edition can work with four damaged HDDs connected to PC-3000 SAS ports within one task at the same time. The total number of the connected HDDs can be increased using motherboard ports and image files.

Crucial features for working with damaged HDDs of a virtual RAID:

Before the Data Extractor RAID Edition appeared, you would have had to have made a full sector-by-sector copy of the data from a simple stripe if one of its members was physically damaged and could not be connected in a standard way, or it would not have been possible to get access to its sectors without using the PC-3000 SAS methods. You could only have attempted to recover the user data after creating a copy.

Taking into account the significant capacity of high end HDDs and possible issues with a full copy of the damaged drive, the Data Extractor SAS RAID Edition provides a unique approach:

How to define the array configuration

RAID configurations can be very complex and data recovery from RAID is not easy even if the configuration appears to be simple. It can be difficult to define the correct order of HDDs, the block size and the initial shift. The task may be complicated further by drive damage or user attempts to rebuild the array.

Key features of the Data Extractor RAID Edition for defining the array configuration:

How to assemble a RAID and logically recover data

Even if you know the full configuration of a RAID and there are no problems with the damaged HDDs, recovering data from a RAID can be a complicated task for multiple reasons: a large number of drives which need to be connected simultaneously, slow read speeds, impossibility to assemble an unusual array configuration, or logical damage.

Maximum number of damaged HDDs per one task: Four HDDs connected to the PC-3000 SAS ports

Read speed of virtual RAID: more than 1.3 GB/s, for a Stripe with 4 SSDs, connected to the PC-3000 SAS ports (it depends on the configuration and read speed of HDD).